You are here: Home / Packers / Murphy to serve on NFL’s competition committee 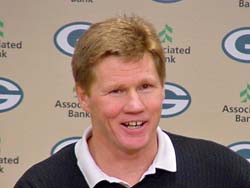 Murphy has been the Packers president since 2008 and played a total of eight seasons in the NFL for the Washington Redskins.  He appeared in two Super Bowls and earned Pro Bowl honors in 1983.

The competition committee studies all potential rules and policy changes for the league.

The last time a member of the Packers served on the prestigious competition committee was former coach Mike Holmgren from 1995-99.