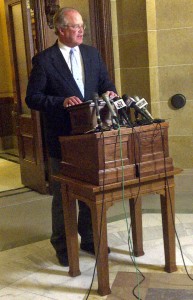 Prospects for Senate passage of the bill rewriting state mining laws look more remote. With only a couple of weeks left in the current legislative session, state Senator Dale Schultz says for now, it’s a no go. He can’t support the Assembly mining bill. “I have received a proposal from the Assembly, it misses the mark, but my door is still open to work with people,” says Schultz, the Richland Center Republican who holds the key vote in the Senate. “I just thought it was important for people in this environment we’re in now, that has gotten so nasty, to know exactly where I was and what my bottom lines were.”

The latest proposal was made to Schultz by Joint Finance Committee co-chairs Alberta Darling and Robin Vos. Schultz says any bill he’ll support will have to include at least one opportunity for public input through contested case hearings. Those hearings are seen as a nonstarter by proponents of an open-pit iron ore mine in the environmentally sensitive Penokee Range region of northern Wisconsin.

“If I’m a mining applicant, I’m not going to come to Wisconsin,” says state Representative Tom Tiffany, the author of the Assembly bill. “There’s a reason we’re ranked the worst in the world, in terms of the permitting process for mining. And that’s because it takes so long to get an answer.”

An alternate mining bill written by Schultz and Democrat Senator Bob Jauch includes one opportunity for a contested case hearing. “I think we owe it to the public to make certain that we don’t start changing things without a thorough public discussion,” says Schultz. The bill he crafted with Jauch also addresses the Assembly bill’s timeline of 360 days for granting permits. Jauch and Schultz believe that’s too short a time frame to assess environmental impacts of a proposed mine. Their measure has a 270-day timeline for such a study, but includes an unlimited number of “off ramps” in which the DNR and applicant can mutually agree to pause the process.