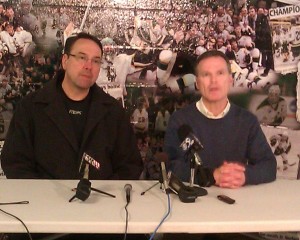 Five of the current seven teams in the NCHA have captured NCAA Division 3 titles.  It’s a good hockey league with a lot of talent.  That’s why Green Knights coach said he’d be surprised if they didn’t stay together, just in a different league.

AUDIO: Tim Coghlin expects these teams to continue to play together :17

What St. Norbert College has going for it is they are one of the premier hockey programs in the entire country.  That’s why Coghlin expects they’ll land on their feet.

AUDIO: Tim Coghlin says the Knights will land on their feet :20

Today is the last time St. Norbert officials will publicly comment on the conference situation until the season is over.  The Knights are currently the top seed in the NCHA playoffs and have a first round bye.  They want to concentrate on obtaining the Peters Cup Championship and advancing into the NCAA Tournament.