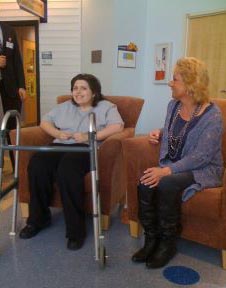 The Florida girl, who survived a 100 foot fall from a Wisconsin Dells ride, returns to the Madison hospital that treated her. Then 12-year-old Teagan Marti broke her spine from the incident and was treated at American Family Children’s Hospital for more than a month.

She left a quadriplegic 18 months ago but is able to walk now. “It was through her determination and hard work and lots and lots of therapy,” her mother Julie said, as Teagan sat quietly.

Julie said her daughter suffered no brain damage and is doing online classes. The 14-year-old is expected to graduate high school on time but her next goal is to “walk without a walker,” according to Julie.

The mother was especially grateful for the care she received at AFCH. “I’m certain my child would not be alive if she had not been able to come to this phenomenal facility.”

AUDIO: Julie Marti on her gratitude to the hospital (3:00)

The Martis attended the news conference in support of a $32 million, four-year expansion of the hospital which includes 12 additional pediatric intensive care beds and 14 beds designed for infants who need complex surgeries.

The children’s hospital has raised $6.5 million has been raised so far, with nearly $10 million to go. UW Hospitals and Clinics has committed $15 million.