You are here: Home / Sports / That smell at the Bradley Center is the Bucks

The Milwaukee Bucks were out-worked and out-played last night.  They fell 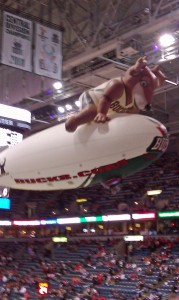 to the under-manned New Orleans Hornets 92-89 at the Bradley Center.

The Bucks lacked passion to start and it cost them a win against the last place Hornets.

It’s the 5th straight home defeat for the Bucks (12-17), who have now dropped 6 of their last 8 games overall.

Ersan Ilyasova scored a season high 23 for the Bucks.

The Bucks were booed on a number of occasions by the home crowd at the Bradley Center last night, and they had it coming.

It’ll be interesting to see if Jennings comments affect the Bucks at the gate.  The Bucks are a small market team that struggles to draw fans.  They can’t have the current face of the organization telling reporters he didn’t play hard and hasn’t for the past few games.

If you’re a Bucks fan and you watched last night’s game, then heard or read Jennings comment, how could you not be upset.  In fact, how could you ever consider buying a ticket to watch the team in the foreseeable future.

The Bucks need to make some changes before the season is lost altogether.  Trading Jennings might be the place to start.  Allowing the player that runs the show to dictate how hard he plays or how often that happens, is inexcusable.

Anybody that pays to watch this Bucks team right now is either as loyal as they come, or they need to have their head examined.

I’m tuning the Bucks out and I won’t return until they start giving maximum effort.  Right now the product isn’t worth watching!