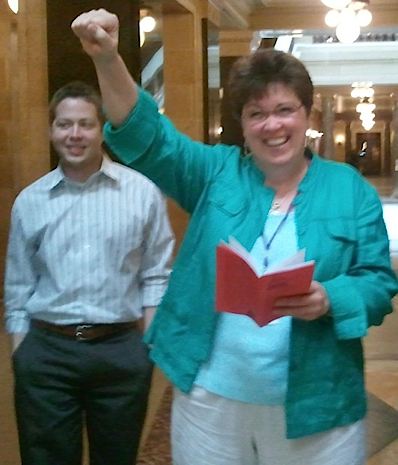 Vinehout says her experience outside of government is significant. “I most recently was a dairy farmer in western Wisconsin; before that I was a university professor; I worked at a number of different jobs; I’ve got a background in agriculture, which is, of course, one of the largest industries in the state; and my professional experience has also been in healthcare and education, which are two of the largest parts of state budget.”

Vinehout says she decided to run after getting support from people across the state, noting there is an unprecedented interest in politics these days. The 53-year-old Vinehout was first elected in 2006. She says her relatively short time in office makes her a good choice for governor, because she’s not set in her ways. “I’ve been sort of around the Senate long enough to figure out the ropes but I haven’t been around the Senate so long that I’m not able to question the conventional wisdom and the way things are done and to look at a new way of doing things.”

As for funding, she’ll figure it out. “You know, I don’t mind being the candidate running on a shoestring. Dollars might buy television ads, but dollars don’t buy people’s votes.”

Vinehout is one of the 14 Democratic senators who fled to Illinois for three weeks last year to block a vote on Walker’s collective bargaining bill.

Other Democrats are also considering a run for governor if the Government Accountability Board calls for a recall election, but Falk and Vinehout are the only announced candidates. Janesville Senator Tim Cullen decided against running a campaign, he said, due to lack of funds. WEAC, Wisconsin’s largest teacher’s union, has recommended Kathleen Falk for governor.

Recall Walker organizers say they have submitted more than 1 million signatures to the GAB. Just over 540,000 valid signatures are needed to trigger a recall election against Governor Scott Walker. Petitions are in the process of being verified.

Republican Party of Wisconsin Communication Director Ben Sparks released a statement: “Kathleen Vinehout is nothing more than a cheerleader for the failed policies of the Doyle administration that led to three straight years of job loss, and buried our state beneath a massive $3.6 billion budget deficit.”