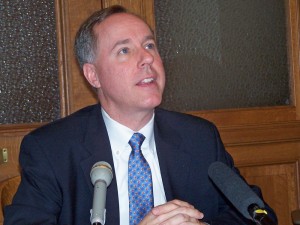 Chaos was common in the Assembly during the recently ended legislative session. Protesters frequently disrupted the proceedings, minority Democrats would pile on amendments to drag out debate, and lawmakers stayed overnight on multiple occasions.

Republican state Representative Robin Vos (R-Rochester) hopes that will not be the new normal and lawmakers will return next session ready to start fresh.

Vos, who many believe will be the new Assembly Speaker if Republicans hold on to the chamber after next November, says there needs to be a “sincere discussion with whoever is in charge” to find ways to make the process more productive. He says that could include limiting the number of bills the Assembly takes up in a day or enforcing time limits on floor debate.

Vos is opposed to the idea of putting voting deadlines on the chamber. He says that only opens the door for those wishing to disrupt the process to go home, get sleep, and then come back to make the same argument for another 12 hours. He’s more open to enforcing existing time limits on certain types of motions on the floor.

As for changing the tone of the debate in the Legislature, Vos thinks the likely recall election against Governor Walker this summer will lead to a “cleansing of the soul” for those at the Capitol. If Walker wins, Vos hopes Democrats will accept the victory and understand that it means the governor has two more years to work on his agenda.