You are here: Home / News / Another round of recalls 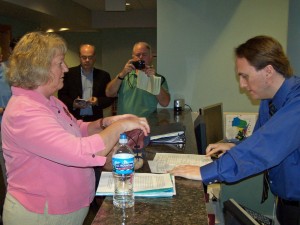 Another round of recall elections could be in Wisconsin’s future. Shirl LaBarre of Hayward filed paperwork with state election officials Monday to officially begin collecting signatures on a petition targeting state Senator Bob Jauch (D-Poplar). LaBarre says Jauch should be removed from office because of his vote against a controversial mining bill in the recently concluded legislative session.

An exploratory committee to investigate the possibility of recalling Republican Senator Dale Schultz (R-Richland Center) also registered with the state Monday. Schultz was the key vote in preventing passage of a mining bill in the state Senate after he broke from Republicans and opposed the measure.

Jauch and Schultz fought against the bill because of concerns it would eliminate key environmental protections and remove the ability of the public to challenge large scale mining projects.

The failure to pass a bill resulted in Gogebic Taconite dropping plans for an open pit iron ore mine in Jauch’s northwestern Wisconsin district. LaBarre says Jauch ignored his constituents and took a “my way or the highway” approach to passing a mining bill, favoring environmentalists over his own constituents.

Jauch called the recall nothing more than an attempt by a “Milwaukee fringe group” to intimidate him. While LaBarre filed the paperwork, Jauch says Citizens for Responsible Government is backing the effort to try and bring “an extreme right wing agenda” to the northern part of the state. CRG has helped launch several recall campaigns in the Milwaukee area, including the election that saw Scott Walker take over as Milwaukee County Executive.

Jauch says those seeking the recall are angry because he and Schultz did not “tow the party line” and tried instead to develop a compromise version of the bill. He says emails to his office show his district supported his stance on the mining bill by a two to one margin, and the recall attempt will not change the way he’s been doing his work.

Organizers of the Sen. Jauch recall have 60 days to collect 15,270 signatures. No time line has been set on whether to start circulating petitions to recall Sen. Schultz.