You are here: Home / Badgers / Badger women to host Mercyhurst in NCAA Quarterfinals 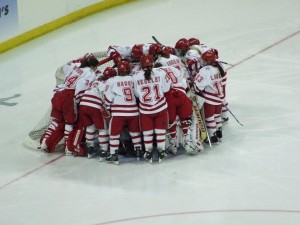 tournament and will host Mercyhurst in the quarterfinals on Saturday, March 10, at 7pm at the Kohl Center.

After winning the College Hockey America regular-season championship, Mercyhurst is coming off a loss to Robert Morris in the CHA tournament final.

Wisconsin and Mercyhurst have met in the NCAA tournament twice before, the last time being in the 2009 national championship game, as the Badgers went on to post a 5-0 victory against the Lakers.  Outside of postseason play, the last time the two teams played against each other was in St. Cloud, Minnesota, at the Easton Holiday Showcase last season.  Hilary Knight and Brooke Ammerman combined for four goals in a 7-4 win over Mercyhurst.

The winner of Saturday’s game will advance to the 2012 Women’s Frozen Four, which will be held at Amsoil arena in Duluth, Minnesota, March 16 and 18.