You are here: Home / Badgers / Ex-Maryland QB to visit Wisconsin this weekend 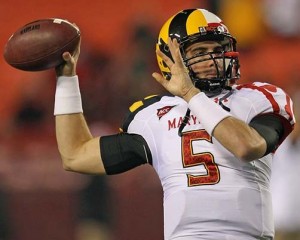 Former Maryland quarterback Danny O’Brien paid a visit to Penn State last weekend and the University of Mississippi on Monday.  O’Brien will visit with the Badgers this weekend in Madison.

O’Brien has two years of eligibility remaining and will be eligible to play next season because he’s scheduled to graduate this spring.

The Badgers are interested because they have quarterback injuries to junior Jon Budmayr, senior Curt Phillips and incoming freshman Bart Houston.  It leaves the Badgers with only two healthy quarterbacks to start spring practices on Thursday.

Last season, O’Brien completed just over 56% of his passes for 1,648 yards with seven touchdowns and 10 interceptions.  He broke a bone in his left arm in a loss to Notre Dame on Nov. 12 that ended his season.

O’Brien isn’t considered to be as polished and ready as Russell Wilson was a year ago at Wisconsin, but teams are interested because O’Brien has two years of eligibility remaining.

According to several media reports, O’Brien isn’t expected to make a decision official until the end of April.