You are here: Home / Sports / Gillespie retiring after long run at Ripon College 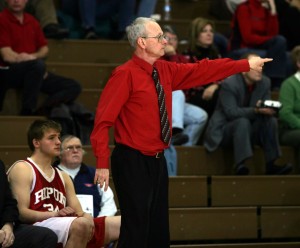 following the baseball season this spring.

Entering his final season as head coach, Gillespie has compiled a combined coaching record of 852-517-3 in basketball and baseball.

As Ripon’s basketball coach, Ripon won the Midwest Conference championship six times and took the team to 10 NCAA tournaments, while averaging 16 wins per season.  In his 32 years as basketball coach, Gillespie saw just four losing seasons, while recording a school-record 22 consecutive winning campaigns from 1983-2004.  He finished his career this year as the school’s all-time winningest basketball coach.  His 510-248 career record gives him a winning percentage of .673, which ranks among the top 40 in Division III baseball history.

On the baseball diamond, Gillespie is in his 23rd season as head coach where he has led Ripon to six conference championships and three NCAA Division-III playoff appearances, while compiling a 342-269-3 (.559) record.

One highlight during Gillespie’s baseball coaching career came during the 2006 season when the Red Hawks became the first MWC team to go undefeated in a 16-game conference season.  He was a part of seven more MWC baseball championships as an assistant coach under his father Gordie from 1995-2005.