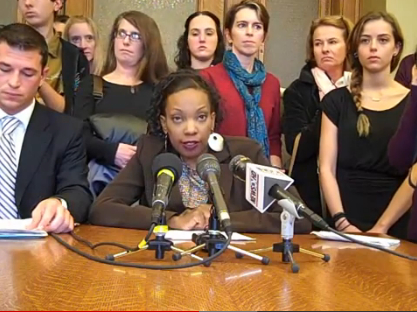 Milwaukee Democrat Tamara Grigsby gets a cheerful welcome back as she returns to the Assembly floor for the first time since getting gravely sick. “Approximately three months ago, I was in a situation in the emergency room where I was told that I would not be leaving the emergency room and that my chances for survival was slim to none.”

Grigsby fights tears as she thanks her colleagues for an “outpouring of love, of support, of kind wishes of thoughts,” she says, “from both Republicans and Democrats.”

The 37-year-old had been in the intensive care unit after falling into a coma. Grigsby had recently battled cancer but it’s uncertain what caused her recent serious health issues. “It taught me that there are some things that are bigger than partisanship … I am so deeply grateful to you all for extending support the way that you did. It meant the world to me and I appreciate it.”

Grigsby later thanked her staff — saying they were incredible, and called them godsends and angels.

Her staff says Grigsby is increasing her stamina and she’s getting stronger each day; she’s been energized by all the support; and she’s looking forward to the hard work ahead, which includes a focus on jobs, women’s health, public education, and access to healthcare.