You are here: Home / News / Republican presidential hopefuls in Waukesha 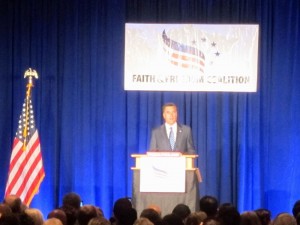 As Wisconsin voters prepare to head to the polls for Tuesday’s Presidential primary, Republican candidates are making a final push in Wisconsin.

Speaking at the Faith and Freedom Coalition’s Presidential Kick-Off in Waukesha Saturday, former Massachusetts governor Mitt Romney made the case that he’s the best candidate to turn around the economic damage caused by President Obama. Romney says Obama’s legacy of trillion dollar deficits needs to be stopped, pledging to cut and cap spending and to introduce a balanced budget amendment.

At the same event, former Pennsylvania Senator Rick Santorum attacked Obama’s health care legislation, saying the bill needs to be a centerpiece of the campaign this November. Santorum says that’s why he’s a better choice than Romney, who championed similar reforms in Massachusetts.

Gingrich also made an appeal for young conservatives to get involved in the campaign, saying the re-election of President Obama would “be a disaster for our children and grandchildren.”

Gingrich and Congressman Ron Paul currently trail in the polls, which show Romney in the lead over Santorum ahead of Tuesday’s primary.