You are here: Home / News / Southern Wisconsin’s turn for snow 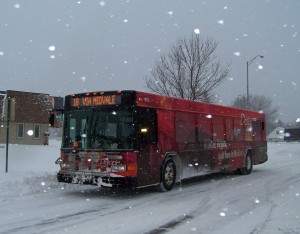 With northern Wisconsin still digging out from a heavy snowfall, now it’s southern and eastern Wisconsin’s turn. Snowfall amounts won’t be as heavy as the fifteen inches or more in some locations up north, but WKOW meteorologist Brian Olson says the fast-moving system will dump four to six inches of wet, heavy snow in a short period, and at the worst possible time. “We’re talking one to two-inch an hour snowfall rates. At its worst, and unfortunately this includes the afternoon rush hour, it’s going to be very tough getting around.”

The National Weather Service has issued a Winter Storm Watch starting Friday afternoon and ending after midnight. “I think people are going to be kind of shocked at the intensity of the storm. and how much snow is coming down in such a short amount of time,” says Tod Pritchard with Wisconsin Emergency Management. “The roads are going to be in very poor shape tonight.” Pritchard says motorists in the Fox Valley need to be aware that the I-43 corridor and U.S. Highway 41 will be areas of particular concern. Check the roads before you travel. Much of Rock County and the Milwaukee metro area can expect more snow – six to eight inches, while to the west, Prairie du Chien could see as little as an inch.

If there’s any consolation, the snow won’t last long: Olson says high temperatures are projected in the low fifties across southern Wisconsin by Tuesday.