You are here: Home / Sports / Trade will help Bucks with playoff push 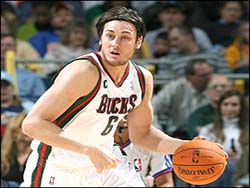 and General Manager John Hammond wasted no time in working a deal to try to improve the team’s playoff possibilities.

The Bucks sent Andrew Bogut and Stephen Jackson to the Golden State Warriors  for Monta Ellis, Ekpe Udoh and Kwame Brown, whose contract expires at the end of the season.

Ellis is the key figure in the deal for the Bucks.  He’s averaging better than 19 points and 6 assists per game this season.

The Bucks actually get players that can help them down the stretch as they try to make a playoff push.  Ellis brings scoring with him, to partner with Brandon Jennings in the backcourt.  They were getting nothing from an injured Andrew Bogut or from Stephen Jackson who has been collecting dust on the Bucks bench for much of the season.

There could be more in the hopper for the Bucks in the trade department with the deadline coming up tomorrow.