You are here: Home / News / Verify the Recall wraps up review 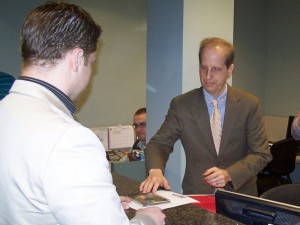 A coalition of Tea Party groups has finished its review of recall petitions. Verify the Recall looked at petitions filed against Governor Walker and Republican state Senators and the group’s Ross Brown submitted their findings on Friday to the state Government Accountability Board.

Brown says he hopes the information will help the GAB review the documents efficiently and cost-effectively, and also identify some issues the agency may not have otherwise caught.

Brown says True the Vote, another partner in the effort, found thousands of invalid signatures. However, he says it was not enough to disqualify the petitions. In all, the group says it found about 63,000 ineligible signatures on petitions against Governor Walker and another 212,000 it deemed questionable.

The GAB will review the information, but spokesman Reid Magney says challenges from outside groups will not be used to check petitions. Magney says state law only allows agency staff and the candidates targeted by recalls to challenge signatures.

The GAB will meet March 30th to rule on certifying the recall against the governor and lieutenant governor and to decide whether to order elections. The board has already approved recalls against four GOP state senators, but has not yet set election dates for those races.