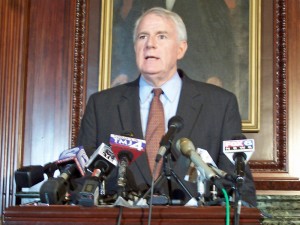 If elected in the upcoming recall against Governor Scott Walker, the Milwaukee mayor says he plans to call a special session of the Legislature to take up a bill overturning Act 10. Barrett believes the proposal would pass the state Senate, and he thinks some Republicans would cross over in the Assembly.

Democrats and Republicans currently share control of the Senate, although that could change after recalls in June against four GOP state senators. Republicans will control the Assembly until at least next year, although several members did vote against the bill last year.

If he can’t get the law repealed this year, Barrett says he would try again next year after the new Legislature is sworn in.

Former Dane County Executive Kathleen Falk, one of Barrett’s opponents in the Democratic primary, wants to repeal Act 10 using the state budget. Falk argues it’s the best course of action because a budget bill must pass and she has pledged to veto any budget that does not include language that restores collective bargaining.

However, Barrett says that could put the state in an even worse position because the current Republican budget would remain in place if the Legislature deadlocks on a new plan, which means cuts to education and public assistance programs would still be in effect.

Other candidates seeking the Democratic nomination in the upcoming recall have largely sided with Barrett’s position on repealing Act 10 independent of the state budget.

Barrett, Falk, state Senator Kathleen Vinehout (D-Alma), and Secretary of State Doug La Follette will face off in a Democratic primary on May 8th.