You are here: Home / Brewers / Brewers swept by Braves 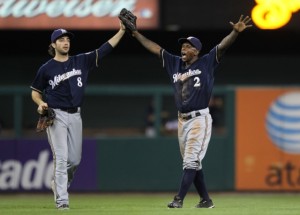 the Atlanta Braves, 7-4 the final yesterday.

Chipper Jones returned from knee surgery in March and clubbed a 3-run homer for the Braves.  Jason Heyward also homered for the Braves, who have won 5-straight after dropping their first 4-games.

Jonathan Lucroy homered and drove in 3-runs for the Brewers.

AUDIO: Jonathan Lucroy says it was a tough series for the Brewers :09

The Brewers haven’t been able to solve the Braves at Turner Field.  They’ve now dropped their last 8-games there.

AUDIO: Jonathan Lucroy on the Brewers struggles at Turner Field :12

The Brewers pitching staff has compiled a 5.65 ERA, which is bringing of the rear in the National League.  And the hitters aren’t helping matters.  They’re off to a .228 start offensively as a unit.

Nobody’s panicking after the Brewers 4-6 start through the first 10-games.  The Brewers started 5-5 in 10-games last season and wound up winning the division.

The Brewers are off today.  They’ll open a 3-game series against the Los Angeles Dodgers at Miller Park on Tuesday night.  The Dodgers are red hot out of the gates.  They Dodgers have won 6-straight and are off to a 9-1 start.