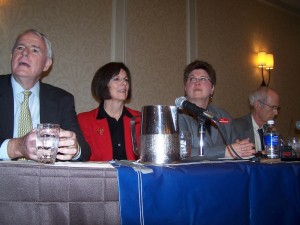 While they admit overturning a controversial bill that effectively ended collective bargaining for most public employees will be difficult, the four Democratic candidates hoping to challenge Governor Scott Walker in a recall election believe it can be done. However, each offered a different approach to accomplishing that goal during a forum in Madison Wednesday night hosted by the Dane County Democratic Party.

Former Dane County Executive Kathleen Falk believes the best way to overturn Act 10 is to force the change into the next state budget. She says the budget is the only bill that needs to pass each session and it offers the best opportunity to force Republicans to address the issue. Falk says calling a special session or just introducing a bill on its own will not work, because Republicans will likely block consideration in the Assembly.

Milwaukee Mayor Tom Barrett believes it would be a dangerous idea to make the issue a requirement for passing a state budget. He notes that if lawmakers fail to pass a budget the previous plan from Walker and Republicans would remain in place until they can reach a deal. Barrett says that could be far worse for the state.

Barrett says he would introduce a bill and call a special session on the issue. If Democrats win control of the state Senate in the upcoming recalls, he argues some Assembly Republicans may rethink their position on Act 10 and many will “not be as brave as they may have been last spring.”

Secretary of State Doug La Follette agrees full Democratic control of the Legislature will be needed to overturn Act 10 and pledged to work to put progressive candidates in office to shift the balance of power. However, he believes there are some things he could do as governor to lessen the impact of the law, such as having the Department of Administration and public employees work together on labor issues.

State Senator Kathleen Vinehout (D-Alma) says she already has a bill to repeal the law ready to go, and she believes it can still be done even if Democrats can only win back control of the state Senate. She says the state also needs to cooperate with public employees to address the serious financial issues facing Wisconsin.

The candidates answered a series of questions from Dane County Democrats on issues ranging from their policies on clean energy to how they would go about restoring cuts to education. The four will face each other in a primary election coming up on May 8th, with the winner going on to face Governor Walker in the recall election on June 5th.