You are here: Home / News / Candidates file papers with GAB 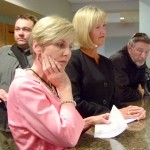 All four Democratic candidates for governor in the recall election file their nomination papers.

Tom Barrett’s wife, Kris, delivers signatures to the Government Accountability Board on behalf of the Milwaukee mayor. She tells reporters she’s not worried about recent attacks on her husband coming from AFSCME — one of the nation’s largest public-employee labor unions. “No, I think that there’s a lot of people who see Tom as a leader and that they know he’s supports their rights and the right to collectively bargain and he will represent them.”

Former Lieutenant Gov. Barbara Lawton helps drop off some 7,000 signatures on behalf of Barrett’s campaign, although the GAB only accepted 4,000. Lawton is a longtime supporter of women’s issues, advocate of electing more women to political office, and critic of the Republican agenda of attacking women.

She had supported former Dane County Executive Kathleen Falk in the past, but is behind Barrett in this race. “Today I am endorsing Tom Barrett because I trust that he will carry that banner on our behalf as governor.” Lawton says Barrett is the candidate with the leadership, integrity, and statesmanship the state needs to restore dignity to Wisconsin politics.

Meanwhile, Falk was the first to file today; she turned in 4,000 signatures and discussed her endorsements. “I’ve earned the endorsement of every single organization that has endorsed against Governor Scott Walker … I’m very inspired and honored by that.”

Secretary of State Doug La Follette turned in, he says, 3,331 signatures. How will he gain enough support, considering he’s trailing in the polls against his competition? “Well that was a very old poll before I had even announced, and my pollster said it wasn’t a very good poll. So let’s see what happens now.”

La Follette says the final poll is on Election Day; he’s got name recognition, he says, and strong support from Democrats, Republicans, and Independents; he can win without big money and attack TV ads. “People know me; I’m a known quantity.”

Kathleen Vinehout (D-Alma) turned in 3,300 signatures — enough to put her name on the ballet. The Eau Claire-area senator says voters should support her if they don’t like money in politics and if they don’t like being told who they should vote for.

As for the lieutenant governor’s race, Mahlon Mitchell submitted 4,000 signatures. Mitchell, the president of the Professional Fire Fighters of Wisconsin, says he’s not deterred by a recent push from the Republican Lieutenant Governors Association to support Kleefisch.

Mitchell explains why he wants to get Rebecca Kleefisch out of office even though he says it’s the governor making all the controversial decisions. “Well, I think she’s been a rubber stamp to Governor Walker. She hasn’t stepped out to say that she doesn’t agree with Governor Walker.” He says she’s just one heart beat away from the governorship so her job “is very relevant, very important.”

The Republican Party of Wisconsin issued a statement regarding today’s filing deadline for candidates: “Today protest candidates turned in the required number of signatures to appear on the ballot in all six recall elections. Their candidacy will ensure election fairness going forward and guarantee there is one primary and general election date for all candidates.”

Two people filed as Republicans to run in a primary with Governor Walker, who blames “out-of-state special interests” and “the big government union bosses in Washington” for driving the recall effort.

The primary is May 8th, and Walker said he had no preference who he’ll face on June 5th for the general election. He says the challenger is secondary to the big money going into the race from the unions out of state.

The GAB lists all candidates registered on their website.