You are here: Home / News / Don’t blow off tornado warnings 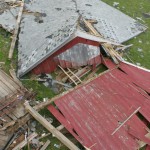 Emergency officials urge Wisconsin residents to “Listen, Act and Live!” Tod Pritchard with Wisconsin Emergency Management says it’s important to not only listen to tornado watches and warnings, but also act on those warnings by seeking shelter without dawdling. “People needed between two and nine warning confirmations before they took action, before they sought shelter.”

Pritchard is referring to a Weather Service study which showed that the survivors of last year’s Joplin, Missouri tornado didn’t seek shelter until after several warning confirmations.

A statewide tornado drill is planned for 1pm today to help schools, businesses, and residents practice their tornado response procedures. The safest place during a tornado is in the basement. If that’s not possible, Pritchard suggests going underneath something stable, like a staircase or table. “Most fatalities in a tornado happen when stuff falls on top of people. So if you can find something to get under … that’s gonna give you a lot of protection.”

Mobile homes give little to no protection during a severe storm. Pritchard says, if possible, go to a storm shelter in your community. And if you’re in your car, seeking shelter under an overpass is a bad idea. Pritchard says 140 mph winds can be doubled in the funnel-like space under the overpass.

For the first time ever, Radio, TV and Cable stations across Wisconsin will participate in the statewide tornado drill. And for the first time, NOAA Weather Radios will be tested during the drill. This week is Tornado and Severe Weather Awareness Week in Wisconsin.