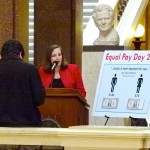 Inside the state Capitol building state Representative Kelda Helen Roys (D-Madison) says women are still being paid significantly less than men doing the same jobs. “There are too many of us that are fighting back as Republicans continue to wage this war on women and we are not gonna let Governor Walker or Senator Grothman or any of the other perpetrators get away with this any longer.”

April 17, 2012 marks the national Equal Pay Day, highlighting the disparity in pay between men and women. Madison attorney Linda Roberson says Wisconsin women have to work nearly three months, essentially for free, just to catch up to men. Bashing the Republican Party was a theme at both events. “I truly believe that a women who votes for the Republican Party at this point is like a deer joining the NRA. They’ve got us in their sights.”

Women working in Wisconsin still earn only 78 cents for every $1.00 earned by a male worker. Roberson says, as a group, working women in the state lose almost $10 billion per year. She says closing the gap in pay equity brings women out of poverty, as well as the men who depend on them.

Outside the statehouse at the State Street entrance, WEAC president Mary Bell says roughly three of four Wisconsin teachers are women. “To ignore female-dominated professions and accept that these employees are underpaid devalues the people who educate and care for our future. More than anything, this harms our next generation — women and men alike.”

Mary Bell and Representative Chris Taylor spoke about women’s issues outside the Capitol at the State Street entrance while supporting Kathleen Falk for governor. Representative Roys and others wore red, symbolic in getting women out of the red. WRN called Grothman’s office for comment, but he wasn’t available.

Senator Mark Miller (D-Monona) says in a statement: “Repealing the Wisconsin Pay Equity Act hurts the bottom line for Wisconsin families and Wisconsin’s economy.” He says, “Women aren’t asking for special treatment. They are asking to be treated the same as male employees.”