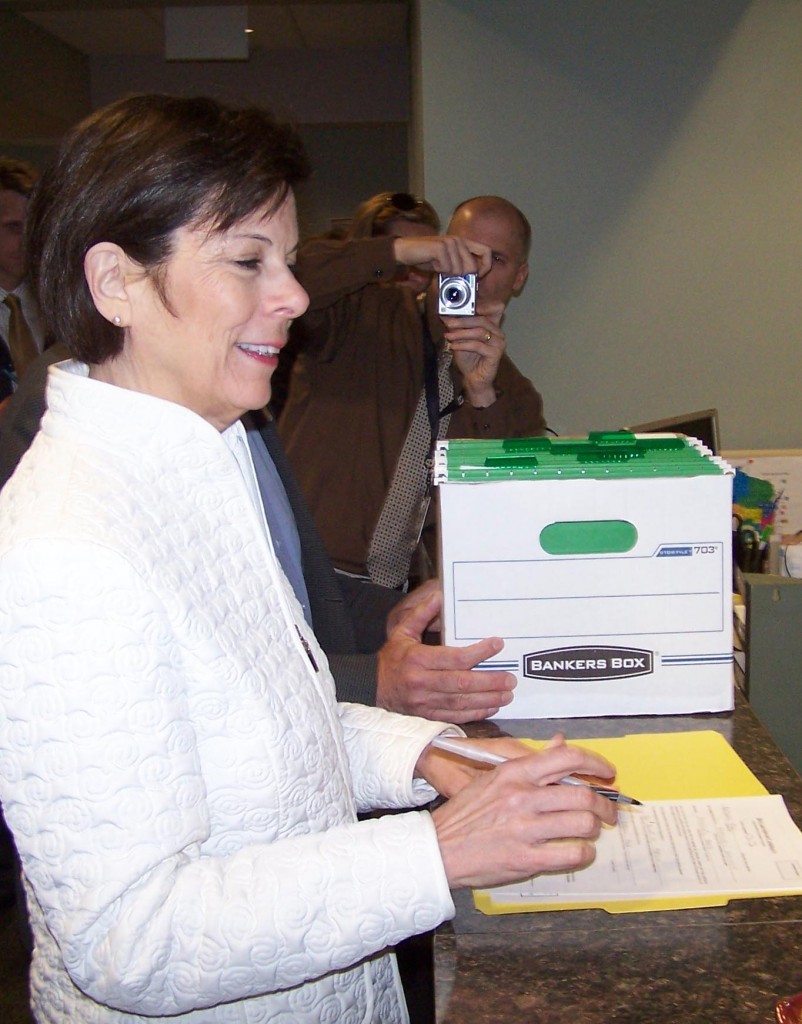 After turning in her nomination papers to the Government Accountability Board this morning, Kathleen Falk emphasizes her “grassroots” campaign. The Falk campaign says 500 volunteers – from 150 municipalities – gathered 4,000 signatures, twice the number needed to put her on the Democratic primary ballot for governor.

While speaking to reporters, Falk says she’s “inspired” that every organization that has endorsed a recall of Governor Scott Walker, has endorsed her as a candidate. That includes AFSCME, a union critical of another Democratic candidate, Milwaukee Mayor Tom Barrett.

“Tom has to defend his record,” replies Falk, when asked if the union criticism is fair. “As a county executive, I sat down with eight unions. It wasn’t easy, it was hard.” The former Dane County Executive says negotiating for the 5 percent pay cut from county workers was the “opposite” of what Governor Walker did. Falk also insists she is the only candidate that has a detailed jobs plan for Wisconsin.

The other Democratic candidates: Barrett, Secretary of State Doug La Follette and state Senator Kathleen Vinehout also appear to have turned in enough nomination signatures to be on the ballot.

Meantime, the state GOP will run Gladys Huber as a fake Democrat to make sure there is a gubernatorial primary, thus guaranteeing a general election the same day as the Senate recall general elections.

Falk, an attorney by trade, was asked whether prosecutors should look into it. “The lawyers and the prosecutors will sort all that out,” she says. “I’m out here talking to real citizens who are really committed to getting the job done.”

The GAB has set the primary date for May 8 and the winner emerging to face Walker June 5.