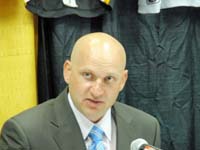 The Gamblers also, for a third straight year, led the league in goals against allowing a league low 138.

At the turnstiles, the Gamblers attendance increased for the fourth consecutive year.  110,770 fans passed through the gates at the Resch Center this season, averaging 3,692 fans per game.  Average attendance has grown each of the last four years to 3,692 per game which is 1,037 per game more than 2007-08.

The Gamblers receive a 1st round bye in the USHL playoffs.  They have scheduled home games on Saturday, April 21st and Sunday, April 22nd for Games 1 and 2 of the Clark Cup Eastern Conference Semi-finals.  Face-Off is set for 7:05pm on Saturday and 3:05pm Sunday.  Their opponent is yet to be determined.