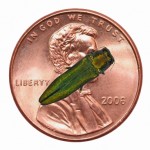 As summer approaches and with the emerald ash borer about to make a comeback, Mick Skwarok of the Wisconsin Department of Agriculture, Trade and Consumer Protection (DATCP) says workers are hanging up over 2,100 sticky, purple, detection traps in ash trees at various locations around the state. “In an effort to try to find either new infestations in previously unknown locations or further define some of the areas that we know to be infested, but we don’t know just how far those infestations may extend.”

A number of workers are crisscrossing the state to install the traps, but Skwarok says the annual search for the tree-killing bug will be focused mainly in the northern half of the state. The traps are designed to attract beetles through color, scent, size and location. “Throughout the course of the summer those traps will be monitored. … The hope is that we don’t find anything.”

Most of the traps are being placed north of a line from Manitowoc to Trempealeau. Twelve counties are under quarantine for the emerald ash borer — restricting the movement of firewood. The insect has already destroyed millions of ash trees in 15 states and two Canadian provinces.

EAB was discovered near Detroit in 2002 and is thought to have arrived in wooden shipping crates from Asia.

The quarantine is in La Crosse, Vernon, Crawford, Brown, Fond du Lac, Sheboygan, Washington, Ozaukee, Waukesha, Milwaukee, Racine, and Kenosha counties. DATCP has much more information on its website, which helps landowners to identify the bugs and their destruction.