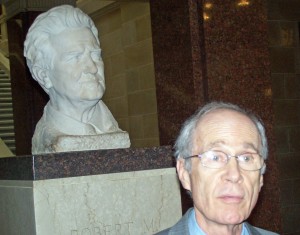 Secretary of State Doug La Follete is making some campaign promises. La Follette, seen as a long shot in the Democratic recall primary campaign, wants to restore the appointments of the DNR and Veterans Affairs secretaries to their respective boards. And he’d restore the authority office he now holds, after years of diminished responsibility. The candidate says Governor Scott Walker has made more than 30 civil service positions political appointments. “The civil service is an important tradition, going back to Fighting Bob La Follete,” he said. “We should believe in the civil service. It gives state employees protection. They can be whistleblowers. They can do their jobs without fear of political interference.”

La Follette, who’s not taking any PAC money, compares his campaign to those of more well-supported opponents. “They’re not talking about the important issues,” he said. “And I think the campaign I’m running, talking about important issues, is how a campaign should be run, not lots of big money.” La Follette’s latest financial filing the state Government Accountability Board shows he’s raised just over $118,000. La Follette faces Milwaukee Mayor Tom Barrett, former Dane County Executive Kathleen Falk, and state Senator Kathleen Vinehout in next week’s Democratic recall primary.