You are here: Home / News / Madison struggles with Occupy camp 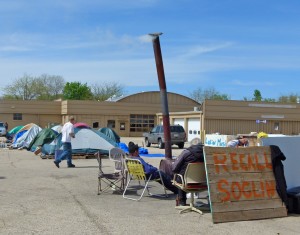 People who have been living at the Occupy Madison site a few blocks off the Capitol Square have just a few days to find a new place to stay. A permit for the site, located in the vacant parking lot of a closed car dealership, expires this coming Monday.

Downtown Madison Alderwoman Bridget Maniaci says the crowd at the site has changed since the location was first approved. While the effort was launched by those protesting against the distribution of wealth, most of the people camping out in the 800 block of East Washington now are homeless.

Many of the residents have alcohol and drug problems, and police and neighborhood residents have expressed concerns about their continued presence. Madison Mayor Paul Soglin has voiced a strong desire to remove the encampment, raising concerns that it could attract more homeless people to the city if it is allowed to continue.

Maniaci says she remains hopeful the city will help residents find other choices.