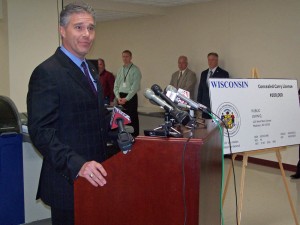 The state on Friday printed off concealed carry permit number 100,000, and Attorney General J.B. Van Hollen say applications are showing no sign of slowing down. He says the office continues to receive hundreds of requests each day from those wishing to carry a concealed weapon.

The Department was frequently behind on issuing permits in the first few months after the law took effect. Permit holders often had to wait months for approval. Van Hollen admits the agency was unprepared for the initial onslaught of applications, and DOJ employees worked tirelessly to get caught up. He says the system is now running smoothly with few delays and most applications are being turned around “as fast as they come in,” after completing background checks and data entry.

At the current pace, the attorney general estimates the state will go well past an initial projection of issuing 125,000 concealed carry permits by the end of the year.