You are here: Home / Packers / Packers 2012 schedule has plenty of flavor 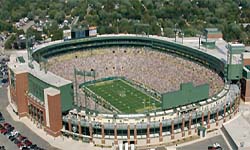 The Packers return home to host New Orleans before hitting the road for three straight games against the Colts, Texans and the Rams.  The October 14th game at Houston is also on Sunday night.

The Packers return to Lambeau Field on Sunday, October 28th against Jacksonville, then host Arizona the following Sunday.

The Packers finally get their bye week, after 9-games.  It comes the week of Sunday, November 11.

Following the bye, the Packers play back to back games against the Lions and Giants.  The Sunday, Nov. 25th game against the defending Super Bowl champion Giants is on a Sunday night.

The Packers then hit December with home games against the Vikings (Dec. 2) and Lions (Dec. 9).  The Lions home game is also on Sunday night at Lambeau Field.

The following week, Sunday, Dec. 16th brings a trip to Chicago against the Bears.

The Packers close out the final two weeks with a home game (Dec. 23) against the Tennessee Titans and a road game (Dec. 30) at Minnesota.

That 5-game December slate features 4 of the 5 games against Division foes.

The schedule has the Packers playing 5-games in prime time, a pair of 3:15 starts and nine noon kickoffs.

Click on the link below to see the Packers 2012 schedule.