The Green Bay Packers selected USC DE/OLB Nick Perry with their first round pick, #28 overall in the 2012 NFL Draft. 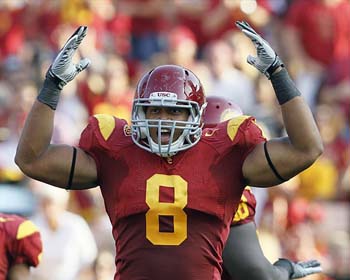 The Perry pick gives the Packers bookend USC players on the outside with Clay Matthews on the other side for Green Bay.  Perry brings more size to the Packers and we’ll see how the Packers plan to use their top pick.  Perry is listed at 6’2, 271, and played with his hand on the ground most of the time.  But GM Ted Thompson believes Perry is athletic enough to play outside linebacker and will work in that area with the Packers.

Packers General Manager Ted Thompson met with the media at the end of the first round to discuss the selection of Nick Perry.