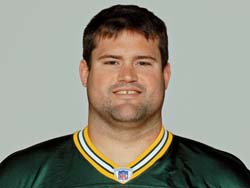 Clifton was selected by the Packers in the second round (44th overall) of the 2000 NFL Draft.  He played in 165 games for the Packers with 160 starts at left tackle during his 12-year career.

Clifton ranks second in franchise history for the most games played by an offensive tackle behind only Forrest Gregg (187 games).

Clifton helped pave the way for a 1,000 yard rusher in eight of his 12 seasons in Green Bay and was a part of top-10 offenses in nine of those seasons.   From 2000 through 2011, Clifton was a member of offensive lines that allowed a total of 350 sacks, good for No. 3 in the league over that span.  Clifton helped limit the opposition to a franchise-low 14 sacks in 2004 as the Packers did not allow a sack in eight games, another single season club record.

The Packers will gain about $5.7 million in cap space with Clifton’s release.