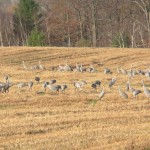 About two-thirds of those who attended the annual statewide conservation hearings support the idea of a sandhill crane hunting season. Kari Lee-Zimmermann, DNR liaison to the Conservation Congress, summarizes the main rationale for having a hunt. “The populations are stable and increasing and there are 12 states that have hunting seasons now.”

Supporters of a hunt say a crane season would reduce corn crop damage by a growing number of the once near-extinct birds, while opponents say the large white cranes are too beautiful to harm and a hunting season could threaten the species once again.

A total of 4,611 people attended Monday night’s hearings held in all 72 counties by the state DNR and the Wisconsin Conservation Congress — a smaller turnout than expected. Lee-Zimmermann says voters in 65 counties approved the idea, while 4 counties voted it down, and 3 counties had tie votes.

Meeting results, written comments, and DNR recommendations are used to advise the state Natural Resources Board. This year’s results will be reviewed at the board’s May 23 meeting in Madison.

The proposed crane season was put on the ballot for the hearings after state lawmakers failed to pass the measure in its recent session. Wisconsin’s sandhill population has grown to about 25,000, and the number of farmers asking to be compensated for crop damage has grown three-fold in recent years.

Zimmermann says there was also quite a bit of feedback regarding the creation of a maximum 25 mph speed on frozen water.