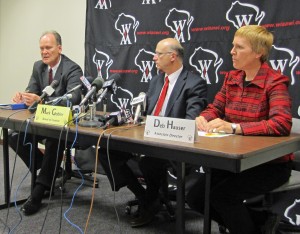 The state high school girls’ basketball tournament is moving to Green Bay, and the boys’ tournament will remain in Madison. The Wisconsin Interscholastic Athletic Association Board of Control on Tuesday approved moving the girls’ state tournament to the Resch Center in Green Bay for the next two years because of a scheduling conflict at the Kohl Center in Madison. “We have found a solution that protects the needs and meets the expectations of the people who are fans of our girls’ and boys’ tournament, in two quality facilities, in preferred weeks,” said WIAA executive director Dave Anderson.

Madison Mayor Paul Soglin said basketball fans made their feelings loud and clear. “The players, their teams, their families, made it very clear that there’s no experience like Madison for a state basketball tournament,” the mayor said. “I just couldn’t be more pleased.”