You are here: Home / Packers / Packers Wrap Up Rookie Camp

The Packers wrapped up their rookie mini-camp on Sunday.  Mike McCarthy says he liked what he saw from the younger Packers 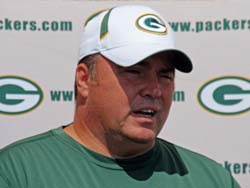 this weekend. He says that the players worked hard and liked the tempo they brought to practice.  The coach says they finished Sunday’s practice ahead of schedule.   McCarty adds that he expects many of the rookies to contribute to the Super Bowl contending team.  He is also happy that all of the team’s draft picks are signed to contracts and will be ready to go for OTAs.  The first full squad Organized Team Activities begins May 22nd.