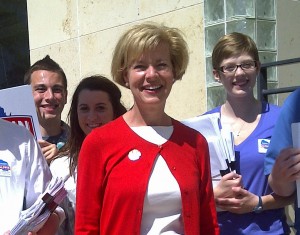 Baldwin and supporters at GAB

Another U.S. Senate candidate has filed signatures with the state. Congresswoman Tammy Baldwin, the Madison Democrat who’s the only announced candidate for her party, says the polling looks favorable for the U.S. Senate race. “There’s been two solid months of polling . . . that showed me with a good lead over three of the candidates, a dead heat with one of the candidates,” Baldwin said Tuesday at the offices of the state Government Accountability Board in Madison. “This is a very competitive seat.”

Baldwin said, with all the focus on the recall against Governor Scott Walker, not many voters are thinking about the Senate race. “As people, this summer and fall, recognize that we have an open U.S. Senate seat . . . I think they’re just going to be beginning to evaluate the candidates.”

Baldwin, who consistently ranks among the most liberal members of congress, will face the winner of a four-way Republican primary (between former governor Tommy Thompson, former congressman Mark Neumann, Assembly Speaker Jeff Fitzgerald, and businessman Eric Hovde) in November. “I’m the candidate who has been fighting for hardworking, middle class Wisconsinites,” she said. “In this very difficult economic time, I think voters are going to be looking for who’s there to fight for them, not big, powerful special interests on Wall Street, or insurance companies or the tea party.”