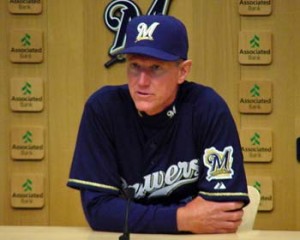 when the dust settled, the scoreboard read SAN FRANCISCO 6 MILWAUKEE 4.

Buster Posey clubbed a monster home run off of that center field scoreboard and drove in 3-runs in the victory.  Posey also drove in a run with a ground rule double in the 1st inning as the Brewers once again, fell behind.

The Brewers dropped their 2nd straight to the Giants and have dropped 6 of their last 7-games overall.  They finished the night 2 of 13 with runners in scoring position.

AUDIO: Ron Roenicke on the lack of clutch hitting :13

Matt Cain pitched in and out of trouble to earn the win, improving to 4-2.

Shaun Marcum (2-3) took the loss for the Brewers, giving up 6-runs on 5-hits with 2 walks and 5 strikeouts in 6-innings.

The Brewers have fallen to 17-26 and 7-games behind division leading St. Louis.  The Brewers will try to salvage the final game of the series today  Marco Estrada (0-3) gets the start for the Brewers against Barry Zito (3-1) of the Giants.  It’s a 12:10pm first pitch at Miller Park.