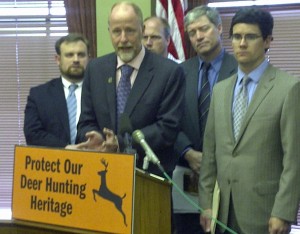 Is Scott Walker’s deer czar intent on transforming the state’s hunting heritage into Texas? That’s the assertion being made by some Democratic legislators, based on past statements made by Dr. James Kroll, and the reality of deer hunting in the Lone Star state. Public hunting lands in Texas are few and far between, and state Representative Fred Clark wants assurances that Kroll has no plans to close Wisconsin lands to deer hunting. “For a Texas wildlife biologist to proclaim Wisconsin public lands no longer public, I think it would be difficult to do,” said Clark. “I hope that our respect for the tradition of public lands is stronger than that.”

Kroll has in the past made critical comments on game management and public lands. “Dr. Kroll’s own earlier statements, his own previous work in Texas and other parts of the country, have all been focused on really what you could call a livestock model of deer management, growing high densities of genetically-improved deer in controlled enclosures” said Clark. “It is much more easy to go hunting in Wisconsin than it is in Texas, and that’s the point,” said state Representative Louis Molepske. “He’s coming from a model that’s much more restricted. We have a very free system here, it’s relatively inexpensive to hunt.”

“There is public land in Texas, two percent. But they don’t have this rich opportunity,” said state Representative Brett Hulsey. “Literally, I can get out of my bed on the west side of Madison and be in my deer stand in thirty minutes. You can’t do that in Texas.”

Representative Nick Milroy says Wisconsin deer hunters would react badly to any plans restricting access to public lands in the state. “Any recommendation that creates a similar system to the landed gentry system of Europe, or the Texas model of high fences, would be seen as an absolute violation of our proud hunting traditions here in Wisconsin.”

The Democratic lawmakers are requesting the Senate and Assembly Natural Resources Committees hold public hearings on Kroll’s preliminary report. Kroll was named as the state’s deer trustee by the state Department of Administration last year. Governor Scott Walker ordered the appointment after campaigning on a promise to review how the deer herd is managed by the state Department of Natural Resources.