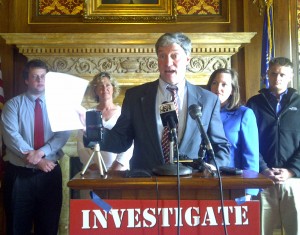 Governor Scott Walker is commenting on allegations that Department of Natural Resources administrators intervened on behalf of a business, while Democrats are calling for a legislative hearing. The governor was asked on Wednesday about report in the Wisconsin State Journal regarding Herr Environmental. The firm spread human waste on farm fields at three hundred percent over the legal limit – but the DNR did not refer the violation to the Department of Justice.

“The bottom line is this case is very similar to cases that have been handled in the past,” Walker told reporters. “I think the timing is political. If it was different, I would view it differently, but it’s no different than it’s been handled many times in the past.”

The paper reported that political appointees at the agency intervened on behalf of Herr, which received minimal fines. Not enough, said state Representative Bret Hulsey. “It’s a little like the State Patrol saying, when they stop a chronic drunk driver, saying “oh, we’ll just get you some counseling, instead of just writing you a ticket” When you have someone who’s a chronic polluter like Herr Environmental, you shouldn’t give them a slap at the wrist.”

The waste spreading took place on fields near properties with forty private drinking water wells. Hulsey and several Democratic colleagues want the legislature’s environmental committees to hold a hearing on the matter.