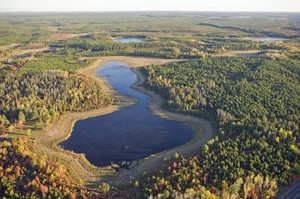 The Wisconsin Department of Natural Resources says it’s close to making its largest land acquisition in state history. The DNR has reached an agreement that would result in the state spending $17.2 million for an easement on over 67,000 acres of land in far northwestern Wisconsin. The heavily forested area stretches across Douglas, Bayfield, Burnett and Washburn counties.

DNR Chief Forester Paul DeLong says the Lyme Timber Company will still own and manage the land, but the easement guarantees public access for years to come. DeLong says the public is acquiring the permanent ability to go hunting, fishing, snowmobiling, or take part in countless other activities on the property. In return, timber operations that provide valuable jobs and other economic benefits in the area can continue.

The easement means the land cannot be broken up for other commercial or recreational development, an issue DeLong says is coming up frequently with property in the north woods. He says a growing number of parcels of land in the region are being pulled off for private hunting properties, which means the public can no longer access them.

Conservation and hunting groups applauded the announcement, saying the public-private partnership provides a strong approach for protecting the industries, jobs, and tourism that northern Wisconsin depends on.

The Natural Resources Board is expected to vote on the deal next week.