You are here: Home / Packers / Driver restructure’s deal with Packers

When the Green Bay Packers lost to the Giants back in January, Donald Driver 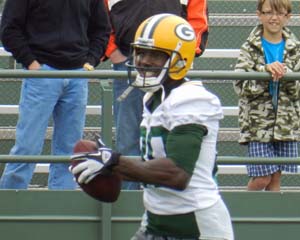 thought that he may have worn his Packers number-80 jersey for the last time.

After winning the 2012 version of Dancing with the Stars, Driver even further cemented his legendary status with Packers’ fans.

Yet during the process, speculation was swirling with regards to Drivers future with the Packers.  Afterall, he had a $5-million salary and a $1.5-million bonus that was due when the Packers opened their training camp doors.  Clearly, Driver’s deal would need to be re-worked, something he agreed to as well.

That figure by itself may ensure that Driver will be on the roster for his 14th NFL regular season.

AUDIO: Donald Driver on what this deal means for him :13

Before news of Driver’s new deal and the reported guaranteed money, it was still a strong possibility that Driver could be released prior to the start of the regular season.  But with $500,000 in guaranteed money supposedly headed Driver’s way, one would think the Packers wouldn’t release him.

The Packers usually only keep five receivers, although coach Mike McCarthy did say Wednesday that there’s always a chance they could go with 6.

AUDIO: Mike McCarthy on the thought of keeping 6 receivers :16

It’s hard to imagine with a couple of quality young receivers on the roster, that the Packers wouldn’t try to keep at least one of them.  Tori Gurley and Diondre Borel are both strong candidates.

Driver seems to think he’s the 2nd best receiver on this team.  With all do respect, Driver is no better than third right now and before the regular season rolls around, he could be pushed back to 4th or beyond.

The $500,000 figure would lead one to think this isn’t an insurance policy.  But don’t forget, the Packers could still be using Driver as insurance.  Having him on the roster through training camp just in case another player gets hurt, or one of the young players doesn’t pan out the way the coaches had hoped.  Driver would still provide the Packers with some coverage.

If he doesn’t stick in the end, maybe the half-million dollars is simply a thank you for 13 years of wonderful service, kind of going away present.

Why is the 37-year old Driver so different from other players reaching the end?  Ted Thompson has had little trouble parting with these legendary players in the past.

Does Driver have 1 or 2 more years left in the tank or are the Packers just keeping him around just in case?  As cold as that sounds, the team is in control of this scenario.  For the first time in years, Driver may not be a lock to make the team and is going to have to work is tail off to return for another season.

What Driver has going for him in that department is his work ethic.  Driver has had to work hard his entire career.  He hasn’t taken a single shortcut on his way to becoming the Packers all-time leading receiver and he’s not about to start now.