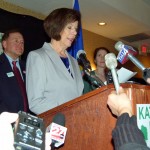 Former Dane County Executive Kathleen Falk loses to Milwaukee Mayor Tom Barrett in the Democratic primary recall election. The first woman to be Dane County Executive had hoped to become Wisconsin’s very first female governor. That didn’t happen but Falk says it’s within reach. “We also put another big dent in that 164-year-old glass ceiling in the governor’s office, but we’ll all keep working until we crack it open.”

Falk’s tough stance on the contentious collective bargaining issue won her early support from labor unions. She and Barrett have similar positions on most state issues, but Barrett opted against the all-or-none attitude that Falk had when she pledged to veto any state budget that did not fix the changes Governor Walker made to collective bargaining. Falk urges her supporters to keep up the fight, saying the next four weeks may be the most important in Wisconsin state history. “Tom Barrett will focus on the real needs of this state — jobs and education. Just as you supported me, we must now support him.”

Falk campaign manager Scott Ross is convinced the unions will throw their support behind Barrett in their effort to rid Walker from office on June 5th, when the general recall election takes place. Falk ran unsuccessfully twice before for statewide office, including governor and attorney general.