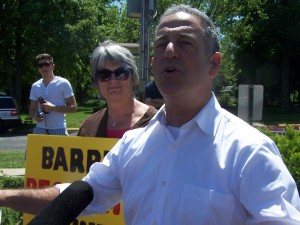 Former U.S. Senator Russ Feingold is calling on Democrats to get out and vote early in the upcoming recall election.

At a stop in Middleton, Feingold cast an absentee ballot for the upcoming recall. He urged other Barrett supporters to do the same so they can then focus on helping other people get out and vote.

Recent polls have shown Barrett behind Walker among likely voters. Feingold believes they are underestimating Democratic turnout, and he believes recall supporters are taking one deep breath. Feingold says there should be a “torrent of enthusiasm in the coming days, as Tom Barrett closes the gap.”

Voters can cast an absentee ballot until June First.

Feingold also says he’s not concerned about the lack of attention being given to the recall by Democrats on the national level. He says the race is about Wisconsin and what was done to this state, and while they would welcome outside support, he says it’s better to focus on what the race means to people living here.