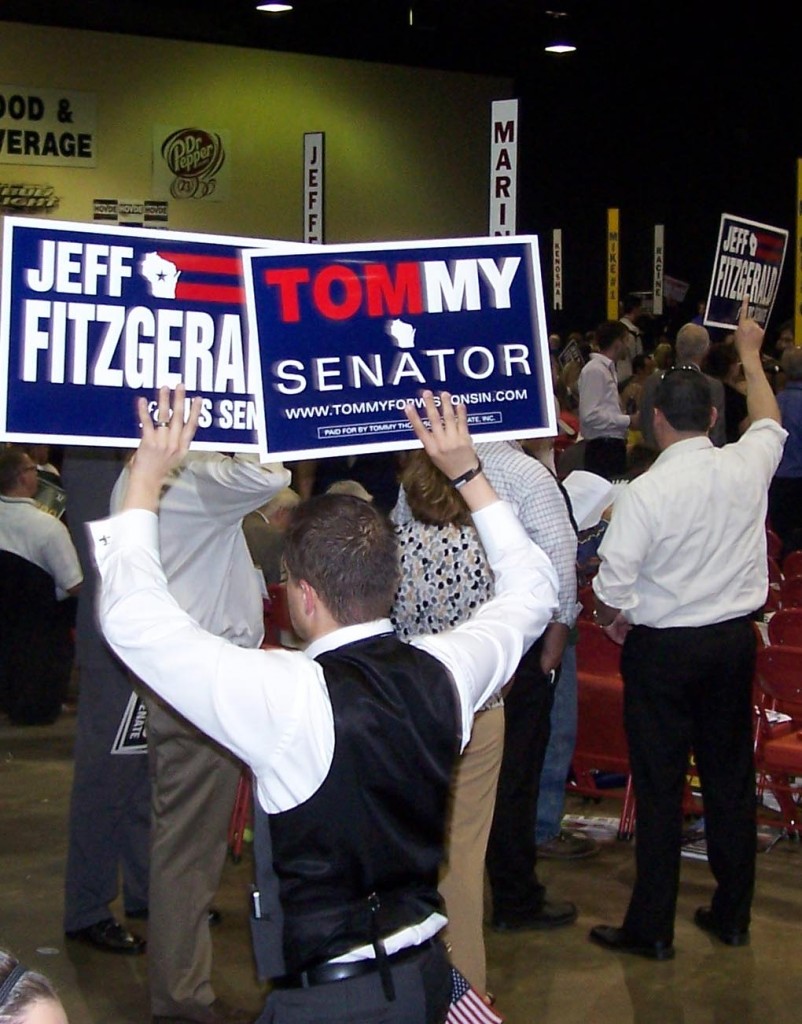 Urging backers of then-eliminated Thompson to back Fitzgerald next round (IMAGE: WRN)

None of the Republican U.S. Senate candidates got the necessary 60 percent of delegates needed to receive a party endorsement at the state GOP convention Saturday. The long process saw heavily favored Tommy Thompson eliminated in the second round and Jeff Fitzgerald strategically climbing to the top spot.

In the initial ballot, Mark Neumann finished first at a strong 42 percent. “I think it’s very exciting we finished 2-to-1 on the first ballot,” said the former Congressman. The primary ballot also had Jeff Fitzgerald (2nd place) and Tommy Thompson (3rd place) both trailing at around 20 percent.

Businessman Eric Hovde finished fourth, knocking him out of contention. The political newcomer had no expectations of winning the nod, saying it’s not representative of how Wisconsinites will vote in the August primary. “You’ve got 500,000 that are going to vote on August 14 and you’ve got 2,500 party insiders here so, I’m fine,” said Hovde.

Going into the second ballot, Fitzgerald supporters convinced Hovde backers to cross over to their side, leading to Thompson being eliminated with a third place finish. The disappointed former governor refused interviews and left the building following announcement of the results.

Into the final ballot, Fitzgerald backers then worked to get Thompson’s people into their camp. The strategy paid off as the Assembly Speaker edged out Neumann to gain the top spot. Fitzgerald says delegates appreciate his work in the state legislature. “We’ve got to make those tough decisions in Washington and I think people are going for that,” said Fitzgerald whose fundraising has been dwarfed by his primary opponents.

Accusations also flew during the convention. Neumann’s opponents accused him of “busing in” supporters and stacking the deck by having supporters run as delegates. “I hope all the candidates went out and worked for delegates,” responded Neumann. “At least I hope they did, that’s what they are supposed to do in this sort of convention.”

Mudslinging fliers circulated with one representing a $500 check that Hovde gave in 2005 to Governor Jim Doyle, a Democrat. Another depicted Neumann with a Pinocchio nose, claiming he distorted Walker’s record.

The Republican winner of August’s Senate primary will go onto face Democrat Tammy Baldwin for the seat of vacating Herb Kohl.