You are here: Home / Sports / Gamblers shoot for 2nd title in three years

A sold out Resch Center (8,500) watched the Green Bay Gamblers knock off 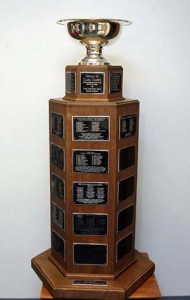 the Fargo Force 5-3 to capture their first USHL Clark Cup playoff championship in a decade back in 2010.

Tonight, the Green Bay Gamblers are hoping to fill the house again, for the 5th and deciding game of the Clark Cup finals against the Waterloo Blackhawks at the Resch Center.  The Gamblers are in search of their 2nd USHL Clark Cup Championship in the last three years.

Waterloo captured game 4 last weekend in Iowa to force a 5th and final game in the series.  The Gamblers haven’t lost back-to-back games all season.  If that trend continues tonight, the Gamblers will have another Clark Cup for their Trophy Case.

No team has been more dominant over the last three seasons.  The Gamblers regular season record over that stretch is 133,34-13.

But just like across the street at 1265 Lombardi, success is no longer measured by regular season wins by the Gamblers.  It’s measured by Clark Cup Championships.  Anything less for the Gamblers tonight will be a big disappointment.