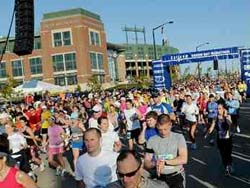 The Green Bay Cellcom Marathon ran into some early extreme heat and decided to shut down early on Sunday.  Just over 2 1/2 hours after the race started, timing mats were removed and the official race clock was turned off.

Marathon Medical Director Dr. Jeremy Metzler said it came down to safety for the participants.

Race officials tried to barricade the finish line after the race was called, but runners made their way through anyway.  So the barricades were removed.

As you are aware, today was a tough day for all of us.  For the first time in the history of the Cellcom Green Bay Marathon, we were forced to call the event.

A lot of planning and expense went into addressing the anticipated warm conditions.  Because of this, we never ran out of fluids on the course or at the finish line.  While many of you were able to handle the warm conditions, the field as a whole was severely affected by the weather.

The number of runners who showed signs of heat-related illness and dehydration reached a critical point shortly after 9 a.m.  Due to the extreme and continued heat, we were forced to make the very difficult decision, in the interest of safety, to call the race.

at 9:25 a.m., the medical director and I began notifying all course personnel, public safety officers and finish line staff that the race was called.  Within ten minutes we stopped accepting official results from all of the timing mats, which is to say anyone who finished after 9:35 a.m. will not receive official results.  In accordance with our contingency plan, runners on the course were alerted to the race being halted and were directed to wait for shuttles to pick them up.

Our participants’ safety is our first priority and at the end of the day, we feel we did the right thing.  We share your disappointment in today’s outcome and look forward to better weather conditions at near year’s event.

Ryan said it’s still unknown how they will handle any prize money or refunds for those who could not finish.