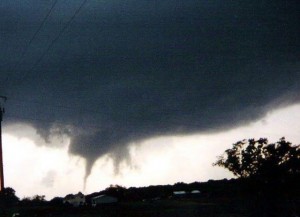 The National Weather Service says a tornado that touched down west of Wausau on Thursday night was likely an EF-0 with maximum wind speeds of about 85 miles an hour. The Weather Service’s Gene Brusky says the twister was on and off the ground for about five miles, but did only minimal damage to trees. There were no reported injuries.

Brusky says the area “really dodged a bullet” with the storm. EF-0 is the lowest rating a tornado can get.

The tornado was the first one reported in the state this year. While Wisconsin has seen them as early as January before, Brusky says it’s not that unusual for Wisconsin to wait until closer to the beginning of spring to see its first twister of the year. He says the relatively dry start to the year and an overall lack of major storms kept the first few months of 2012 relatively calm.

High winds swept across much of the state Thursday causing a wide swath of property damage. Many parts of the state reported downed trees and power lines caused by strong wind gusts.