You are here: Home / News / Mitchell calls for “all hands working” 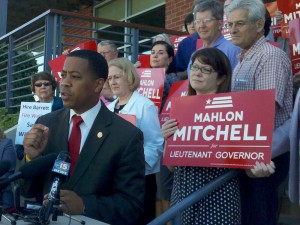 With just a week to go until Wisconsin’s historic recall election, the Democratic candidate for lieutenant governor is calling for voters on both sides to get out and make their voices heard.

Madison firefighter Mahlon Mitchell cast his ballot Tuesday morning in Fitchburg, just blocks from his home. He’s urging voters across the state to do the same thing. It’s a message that Democrats across the state have been pushing heavily in recent days.

The deadline to cast an absentee ballot with local clerks is Friday, June 1st.

Speaking to supporters before going to vote, Mitchell called for “all hands working” in the final days before the June 5th election. Mitchell is taking on Lt. Governor Rebecca Kleefisch in the election. Kleefisch is facing recall alongside Republican Governor Scott Walker.

Mitchell says there are just “seven days to get it right” by electing a governor and lieutenant governor who will look out for all of Wisconsin.

Recent polls have Mitchell and Barrett behind Kleefisch and Walker heading into the recall. Mitchell argues “polls don’t vote…people do” and they have the momentum heading into the election. Still, he admits the outcome of next Tuesday rides heavily on which side has stronger turnout.