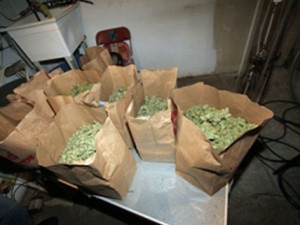 Police released this photo of marijuana seized in the case.

A Wausau mother and her son are facing charges for a multistate drug bust.

Police arrested 63-year-old Barbara Elliot after a Rhinelander freight company tipped investigators off to a suspicious package bound for suburban Portland, Oregon. A police K-9 sniffed the package and police found $106,000 in cash hidden inside.

Police in Portland searched the home of Elliot’s son, 40-year-old Jeremy Williams, and found another $12,000 in cash, an indoor marijuana growing operation and 24 pounds of pot.