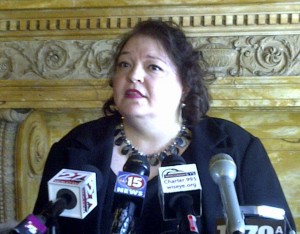 Claims the state has been ‘hijacked’ by ALEC. A report from the Madison-based Center for Media and Democracy highlights what Executive Director Lisa Graves calls the hijacking of Wisconsin by the American Legislative Exchange Council. “We’re calling on Attorney General Van Hollen to investigate ALEC for lobbying in the state of Wisconsin,” Graves said Thursday. “ALEC is an organization whose agenda is to change the laws in Wisconsin and other states.” To that end, Graves said ALEC provides ‘scholarships’ to fly legislators to ALEC events. She said lawmakers from arounf the nation meet with corporate representatives, and secretly vote on ‘model legislation’ favored by corporate interests.

ALEC claims that its activities do not meet either IRS or Wisconsin Government Accountability Board definitions of lobbying. “We have documents from our open records requests in this state, that show them asking for bills to be introduced,” she said. “If that’s not lobbying, I don’t know what it is.”

Jay Heck with Common Cause in Wisconsin said that state law has long prohibited legislators from accepting anything of value from lobbyists. “How is it then, that ALEC is able to fly legislators and their families to posh resorts all over the country, for the purpose of putting them together with corporate lobbyists and having them hammer out these ‘model’ pieces of legislation.”

Graves said 49 members of the Wisconsin legislature, including key Republican leaders, are ALEC members. She said 32 ALEC authored bills were introduced last session, and 19 – including the controversial “Castle Doctrine” – are now law. A request for comment to the office of state Representative Robin Vos, the GOP co-chair of the legislature’s Joint Committee on Finance, was not immediately returned.