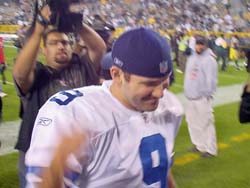 on Sunday at Oneida Golf and Country Club in Green Bay.

The Burlington native fired rounds of 69 and 72 to pull out a 5-stroke win over Paul Jacobsen of Racine.

Jason Duffner made a 25-foot birdie putt on the final hole for a one-stroke victory at the Byron Nelson Championship.  The win is his second in the last three weeks.